If you’d like, you can peruse the Tour listings before setting off on your own in-person tour.

The Walking Tour runs on the Echoes Explorer mobile app— free, and with no ads!

The roots of African American history runs deep in South Carolina, providing a rich history that spans over three centuries and every corner of the state.

Stories of the enslaved and free people of color to civil rights activists, politicians, educators, pastors and many more all contributed to this history. The constant struggle for equality and freedom is often seen in these stories.

Lake City was no exception and this rich legacy lives on in the city at historical sites, remnants, oral histories, and cultural traditions. This tour highlights some of Lake City’s historical African American sites while telling the unique story that Lake City contributed to African American history in the state of South Carolina and the nation.

Click on a Map Pin to see the entry, or browse below. 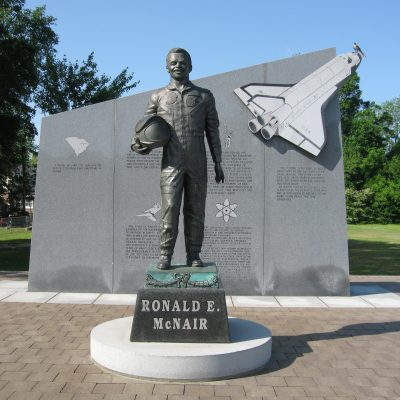 Dr. Ronald E. McNair (1950-1986) was a native of Lake City and renowned physicist and astronaut. He was the second African American astronaut to travel in space, after Guion Bluford, and on January 28, 1986, he was part of the seven-astronaut crew that died in the Space Shuttle Challenger explosion. He was educated in Florence County’s segregated schools and in 1959, at the age of nine, he entered Lake City public library which was white only to check out science books. The librarian refused to give him his books based on his race and called the police. As the police came, he was confident in that the knowledge he sought was rightfully his. McNair would leave the library unscathed with his books in hand and his mother and brother at his side. Decades later, that library would become the Dr. Ronald E. McNair Life History Center and museum located at the site of his monument and park. 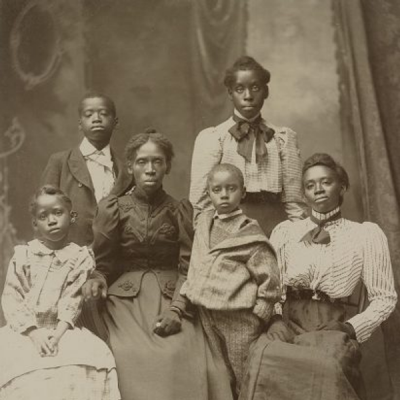 Frazier B. Baker was an African American teacher who was appointed postmaster of Effingham, but under the William McKinley administration, was elected as the first African American US postmaster for Lake City in 1897. He held the position for six months, despite opposition to his appointment from the white community in Lake City. On February 22, 1898, a mob of white townspeople circled their home, set it on fire, and shot at least 100 bullets at their house while the Bakers and their six children were inside. Frazier Baker was shot to death while trying to escape the house along with his infant daughter Julia. His wife, Lavinia Baker and her other children managed to escape with their lives, but three of the children were wounded by gunshots and permanently maimed. The murder led to a national campaign of letter-writing, activism, and advocacy which anti-lynching activist Ida B. Wells persuaded President McKinley to order a federal investigation. Eleven men were tried in federal court in 1899, but a hung jury resulted in a mistrial. Baker’s murder was one of over 6,500 lynchings that took place in the U.S. between 1865 and 1950 as white supremacist attempted to provoke fear in Black communities and uphold a racial caste system. 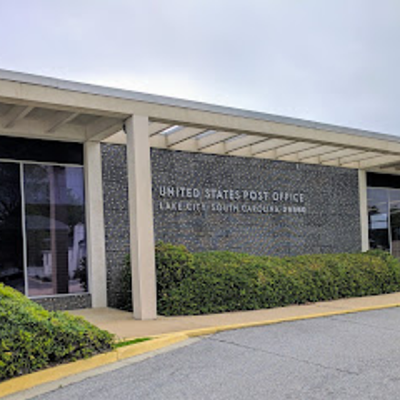 On February 22, 2019, U.S. House Majority Whip James E. Clyburn along with other elected officials and the Baker Family renamed the Lake City Post Office in a public ceremony in honor of postmaster Frazier B. Baker. Having been appointed as the first African American to serve as postmaster at the Lake City Post Office in 1897, Frazier Baker courageously refused to give up his position despite threats from white community members. February 22, 1898, Baker and his infant daughter, Julia, were lynched as white townspeople shot bullets into his home and set it on fire. His wife, Lavinia, and their other children escaped with their lives but were wounded. The dedication took place 121 years after the lynching to acknowledge the ultimate sacrifice that Baker and many others gave in standing up against injustice and intolerance. Following the lynching of Baker, Lake City was without a post office for decades until this post office was erected. The post office building itself was built and opened in 1962 under President John F. Kennedy. 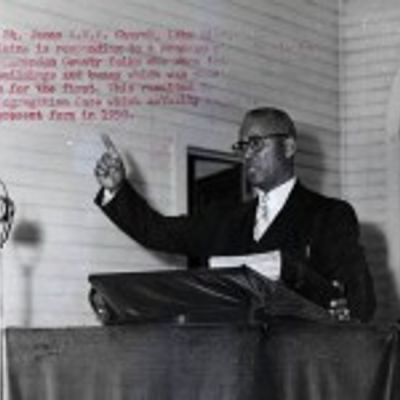 In 1949, having served as an activist, school principal, and minister, Reverend Joseph Armstrong DeLaine (1898-1974) organized African American parents in Summerton to petition the school board to provide a bus for Black students. In 1950, some of these parents including Harry and Eliza Briggs, sued Clarendon County schools to end school segregation. Reverend J.A. DeLaine played a significant role in the monumental Civil Rights Case, Briggs v. Elliott, which sought desegregation of Clarendon County schools and was one of five cases commonly known as the Brown v. Board of Education cases. In 1950, Reverend J.A. DeLaine would be transferred from Pine Grove A.M.E. Church in Summerton to St. James. In October 1951, white supremacists burned DeLaine’s Summerton home and unknown persons would burn the St. James church in October 1955. In 1954, the Supreme Court would rule that segregation in public schools was unconstitutional, but desegregation would take place at “all deliberate speed.” In Lake City, it would not be until the late 1960s when public schools would become integrated both for students and faculty. The St. James congregation would eventually build a new church, Greater St. James A.M.E. in 1957. 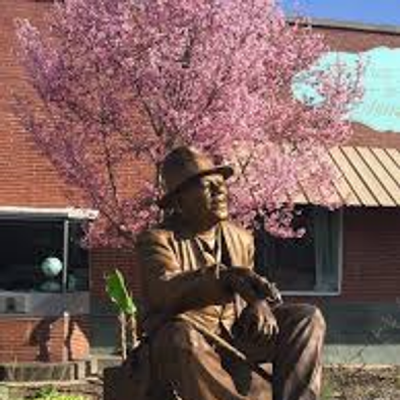 Huey Cooper was a well-known African American citizen of Lake City and was known for bringing cheer and luck to the people of Lake City. Often seen sitting at the corner of Acline and Main Street on a low, cement wall, he cheerfully would let people rub his lucky rabbit’s foot for a nickel. He would then take his earnings to buy cigars and cokes at the nearby train depot. It is claimed that he was born in 1873 which made him 105 upon his death in 1978. A bronze statue was erected to commemorate Huey’s life and legacy on September 10, 2014, at the former location of where Huey would have sat. Huey holds out a rabbit’s foot and a slot was added to his right pocket for depositing nickels. Engraved below it asks people to keep the tradition alive by rubbing his rabbit’s foot and dropping a coin in his pocket. 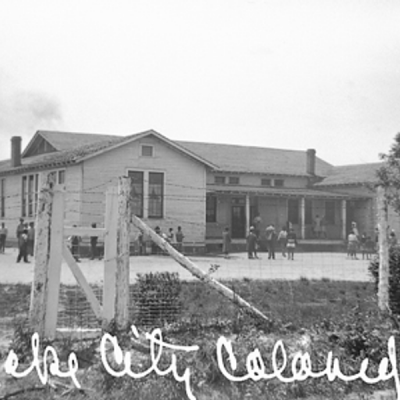 As the original site of the Lake City Colored Elementary and High School on Graham Road, this site reflects the long struggle for desegregation of public schools. Serving Black students from the early 1930s to 1946, this school was built with a Rosenwald school design which included six rooms and an auditorium but lacked plumbing and heating. In October 1946, it would burn down and be rebuilt. In 1953, as part of the SC government’s “Equalization Program,” was intended to construct new black elementary and high schools across SC to circumvent a potential desegregation ruling by the US Supreme Court, Carver High School was one of these schools built as part of this program to accommodate black students. In response to SC’s Equalization of Schools Program, a lawsuit would be filed in neighboring Clarendon County under the name Briggs v. Elliott in 1950 which would challenge the constitutionality of “separate but equal” laws in education. A few months after Carver would open, the Supreme Court would make its ruling in May of 1954 that “Separate but Equal” was unconstitutional. However, integration of schools in SC was slow and Carver High would be segregated until the late 1960s to early 1970s. The school would later be renamed the McNair Middle School after Ronald McNair, who graduated valedictorian from Carver High School in 1967. 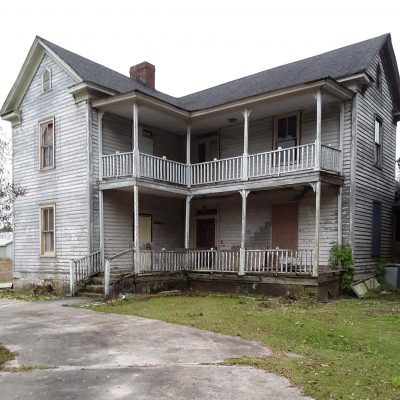 Located at 125 Valley Street, this two story Late Victorian-style house was built in 1905 and was home to the Cockfield family. Born in 1867, Perry David (P.D.) Cockfield was a white local farmer whose family had owned approximately 4,000 acres of land and enslaved dozens of African Americans on the outskirts of Lake City during the antebellum period. Oral traditions and genealogical research showed that bonds of blood and law tied the white Cockfields with the freed people who assumed their surname. Several descendants in this family were of mixed-race parentage which was not uncommon of white planter and large landowning families. Listed in January 2022 to the National Park Service’s National Register of Historical Places for architectural significance, the PD Cockfield House will be restored as Lake City’s first African American History and Education Museum and Cultural Center. 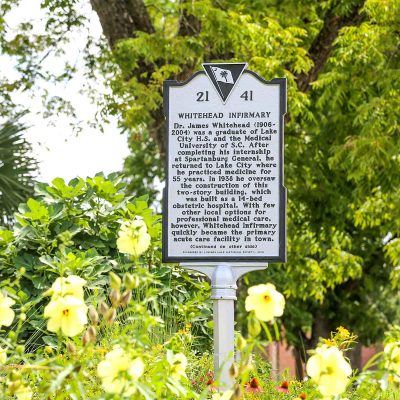 A graduate of Lake City High School and the Medical University of South Carolina, Dr. James Whitehead (1906-2004) oversaw the construction of a two-story brick building which would serve as a 14-bed obstetric hospital in 1938. Whitehead Infirmary would be used by most Lake City residents, white and black, throughout the twentieth century, as medical care in town was limited. While black and white patients were provided care, the building was segregated between the races until the 1960s and can be seen in the interior of the building’s architecture, particularly with the waiting rooms at the North and South ends of the building. The building being intact is currently the Lynches Lake Historical Society and Museum.